Here we set out to prove that Cinderella had bunions and also attempt to answer the following questions:

How could Cinderella’s glass slipper only fit one person in the entire land?

Some people say it was because Cinderella’s feet were so small.

We can only deduce one thing – that Cinderella had a very unusually shaped foot, and a very high probability of BUNIONS! 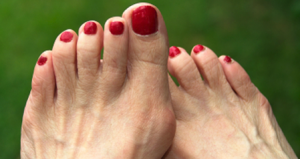 A bunion is bump that forms at the base of your big toe joint. A bunion forms when the big toe is pushed inward and a bump forms on the outside of your foot.   Some people will have soreness and redness at the joint.

Bunions come in all different shapes an sizes.

Why did the slipper fall off Cinderella’s foot?

If you have a bunion, the front part of your foot is much wider than the heel of your foot. This makes an awkward fit for your shoe. Your narrow heel can easily slip out of the shoe, and if you are running, your shoe could easily fall off.

Why was Cinderella’s slipper made of glass?

Cinderella could only wear rags handed down from her stepsisters. Cinderella’s Fairy Godmother wanted Cinderella to feel special, so she made her special custom slippers unlike any other – made of glass, most likely because glass sparkles and would be very shiny.

Because Cinderella had bunions, the glass slipper could only fit Cinderella

Cinderella must have had an unusually shaped foot. We can only conclude that Cinderella had bunions!

Combine Cinderella’s unusually shaped foot with the rigid material of the custom-molded slipper – glass, and you end up with a slipper that could only fit one person’s foot – Cinderella’s.

If Cinderella’s Fairy Godmother just happened to make the slipper out of a different material, it might have been able to stretch a little and fit someone else’s foot, but fortunately for Cinderella and Prince Charming, it wasn’t.

Look for our next article on how Jennifer Aniston has hammertoes.

If you or anyone in your family is having a problem with bunions give our office a call (845) 298-9074 or click here for an appointment request.  Maybe, instead of a custom glass slipper, a custom orthotic might do the trick for your foot.